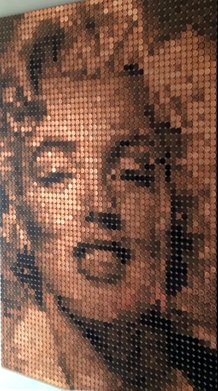 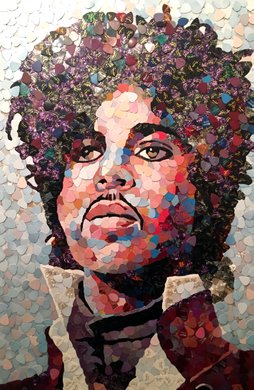 Ed Chapman is a top British mosaic artist with an instantly recognisable style. His work really needs to be seen to be believed. The mosaics contain extremely fine detail, achieved through Ed's painstaking effort creating his subjects using hundreds of fragments of the chosen material used in the work.

Ed creates intricate artworks that often forcing the viewer to question if his mosaics are, in fact paintings. Each work comprises many hundreds pieces, all placed or cut and fastened by hand.

His mosaics have a number of high-profile collectors including foreign royalty and members of The Times' 'Rich List', Arnold Schwarzenegger, Annie Lennox, TV stars, Darts legend Phil ‘The Power’ Taylor, England footballers, an Asian President's family - even Lemmy from Motorhead commissioned a portrait, as seen in the film “Lemmy”.

Ed Chapman's mosaics are now taught on the art syllabus in several schools in the UK, along with such as Picasso and Sir Peter Blake as the other studied artists.

A book about his mosaics is due to be published with Manchester University Press raising Ed's global profile further.

In 2018, his ten mosaics portraits of the UK’s best-loved East Midlanders made using 3,000 rail tickets to emphasise the number of tickets used in a single hour – received widespread press and broadcasting coverage.

Also in 2018, Ed was asked to create by the estate of Ian Fleming to create the original book cover of Casino Royale using torn pages from the latest James Bond novel to be published.

In March 2016 his coins portrait of David Beckham, co-signed by the ex-England captain, sold for more than £8,000 at auction in Mayfair, bought by one of Beckham's former international team mates for his home in Chelsea.

Ed's portrait of Clint Eastwood as Dirty Harry created for his 85th birthday in 2015 and made from 9890 bullet cases including 5 or 6 Magnum cases (one can be removed and replaced) sold for £10,000 after gaining worldwide publicity.

He was the only contemporary artist to have work at Cancer Research’s Abbey Road auction in 2009 with a mosaic of John Lennon. His coin portrait of Mrs Thatcher sold for £13,000 in 2015.

His mosaic for Manchester City F.C. was created for the unveiling of the club's youth academy in 2014 attended by the owner of the club and Chancellor of the Exchequer George Osborne.

In addition to selling mosaics worldwide, Ed has exhibited several times in London as well as in the USA and Europe.

Ed began creating mosaics more than twenty years ago and his work has appreciated significantly as he has gained widespread respect as a mosaic artist throughout the art world.

Influenced by artists like Chuck Close, Robert Rauschenberg, and Jamie Reid, Ed also finds inspiration for his mosaic works in the music and TV, as well as in everyday articles such as magazines.

If you would like to talk to Ed about an art commission or have any questions or proposals about his mosaic art work please get in touch via the contact page.